Equities took yet another beating this week.  The culprit for this week’s weakness were:  Renewed inflationary concerns driven by stronger than expected jobless claims, which fell to the lowest level since early May, geopolitical concerns around Putin’s annexation of four Ukraine territories, and currency issues over the British pound, from concerns over a tax cut plan in the UK and pound weakness vs. the dollar.  And bellwether stock Apple (AAPL) was downgraded by Bank of America citing news of weaker consumer demand.

The challenging markets have not surprisingly resulted in consumers increasing their cash balances.  Data from ICI.Org from 9/29 shows that total money market fund assets (retail and institutional) increased by $6.37 billion to $4.59 trillion.  These cash balances are close to all-time highs, only exceeded by balances during COVID.  These balances are even higher than during the financial crisis in 2008.  If there is evidence that inflation is slowing at a rate commensurate or ahead of analysts’ expectations, this could be a bullish sign for the market if this money gets deployed into stocks (See chart below).

Inflation data continues to be the driver of markets.  The next Consumer Price Index report, or CPI, the most cited measure of inflation, is set to come out on October 13th at 8:30am EST. At the time of writing, current estimates are looking for an 8.1% reading (vs 8.3% for August).  If you look at the largest components of the CPI below, you can see that Housing represents nearly 1/3 of the weighting of the index. 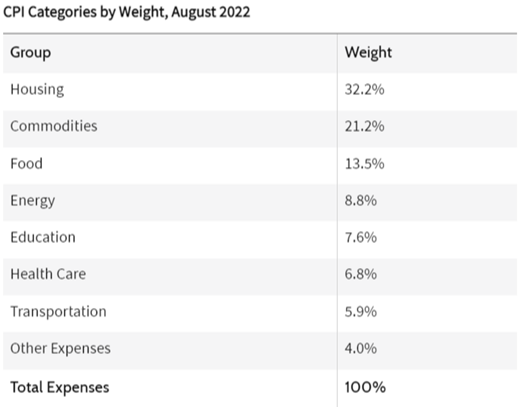 The Fed’s tightening has already had an impact on Housing. This is because mortgage rates have risen dramatically during this tightening cycle.  To give a little context, the average rate on a 30-year mortgage has gone from 3.2% in January to 6.7% currently, an increase of 110% in 9 months. 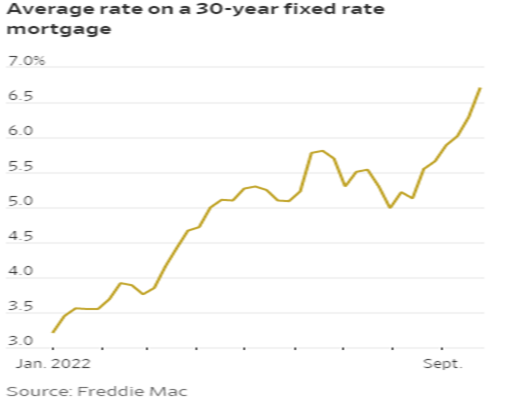 If you are a prospective home buyer, these new mortgage rates have a real impact on purchasing power and have reduced the amount of “house” you can buy.

The impact of increased mortgage rates is shown in the charts below from Zillow.com. 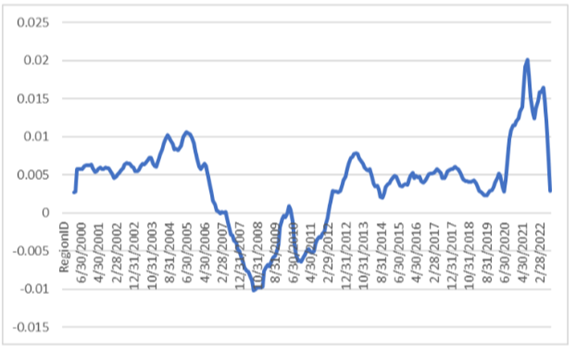 The chart below shows the index of asking rents – also falling. 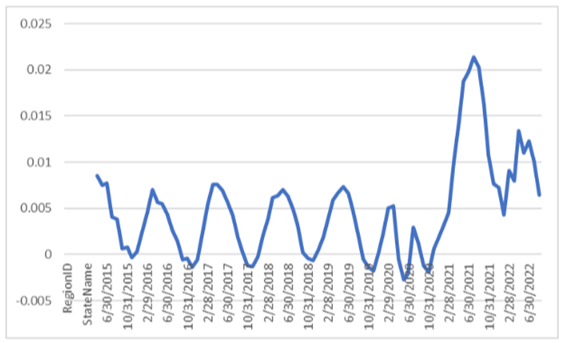 Fed Chair Powell has made it clear that the Fed will continue to use interest rate hikes to combat inflation. Period.  They will continue to do so until the above charts show negative growth and CPI moves toward the Fed’s long-term inflation target of 2%.  We clearly have a long way to go before we attain the long-term target is even on the radar.

The biggest question for the market is not if inflation will subside – it will, because the Fed will raise rates until it does.  The concern is if the rate at which inflation subsides is slower than analysts are forecasting, in which case the tightening cycle (or the rate hike cycle) will have to be dragged out longer, which puts the economy at a higher risk for a recession.  As the last chart below shows, peak inflation was at 9.1% for July (August’s release date). 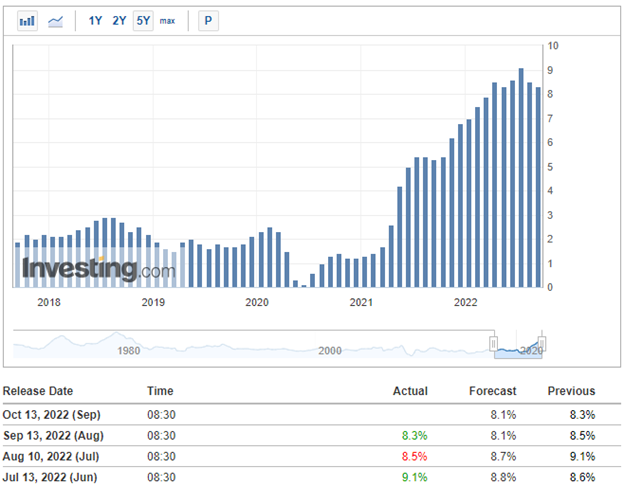 There is a time lag between rate hikes, economic activity, and therefore inflation.  The reality is that we don’t know exactly how long that lag is.  Estimates run anywhere between 9 months and 18 months for widespread economic impacts to be felt due to monetary policy changes.  However, as we have all seen over the past few months, the market’s reactions are IMMEDIATE and are pricing in future expectations of what will happen to the economy.

If you have equity investments and maintain a long-term investment horizon, then dumping your positions in this environment is not an optimal strategy.  If you believe in three to five years the market will be higher than it is today, then your goal should be to ride out this storm and get to the other side.  If selectively reducing economically sensitive names and reallocating spare funds to short-term Treasuries to lower your portfolio’s overall risk will help you sleep better at night, then have a conversation with your advisor – we can implement a strategy in this regard that will generate safe returns (through U.S. Treasuries) and provide you with liquidity should you need it.

Have a great weekend,