Despite the Friday rally, it was much the same pattern in stocks this week, a step or two forward, then a couple steps back. And the main culprit remains the same…increasing inflation leading to tighter monetary policy and rising interest rates, and the higher rates leading to a bigger discount of a company’s future earnings.  Adding to the worry are recession fears, and reported corporate earnings coming in less than estimates. Toss in geopolitical tensions, rising energy costs, and election uncertainties, and there are plenty of things to pressure the markets.

Where to for stocks over the remainder of he year? With expectations of a 75 basis point hike in Fed Funds from the November meeting and another 50 points in December, the bias is to the downside. Fidelity Investments’ Jurrien Timer thinks further 9% drop for the S&P 500 is possible.  While the forecast P/E based on estimated earnings for the next twelve months is 15.5, he employs regression analysis using the 2-year nominal interest rate of 4.5%, and the ten-year real (after inflation) rate of 1.7% as inputs, and comes up with a P/E ratio of only 13.5, which would be a 3,200 S&P 500. 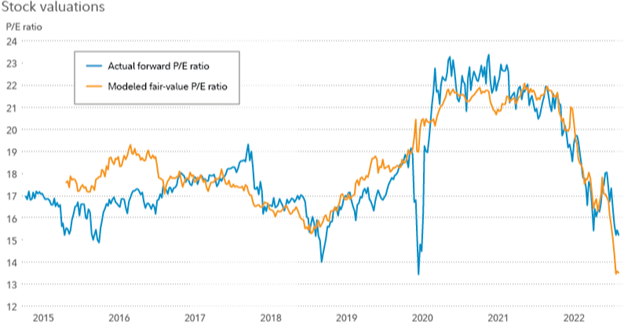 To be sure, Mr. Timmer’s model is only one among many, but with an expected year-end Fed Funds rate of 4.9% the likelihood of a stock and bond market turnaround is unlikely in the near term.

Notwithstanding that, stocks have been a good hedge against inflation over the years. The chart below from T. Rowe Price shows that over extended periods of time, stock returns have topped inflation. The steadily increasing dividends of stocks can protect against the loss of buying that inflation causes, something which the fixed returns of buy-and-hold bonds cannot do. 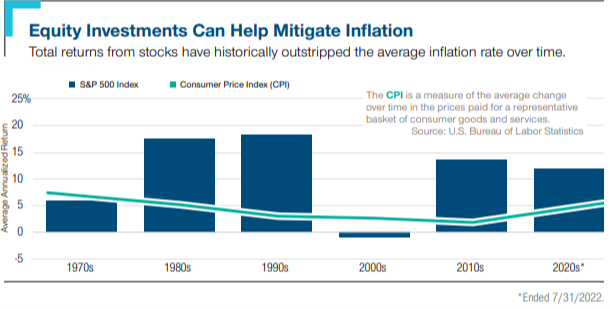