September continues its reputation as the worst month for stocks.  The inflation numbers that were released earlier this week were higher than expected, ending any hope that the Federal Reserve might slow down its hawkish stance on inflation.  The potential of a recession, if we are not already in one, is strong and rising.   Market watchers from Liz Ann Sonders, Chief Investment Strategist at Charles Schwab, to Thomas Hoening, former Vice Chair of the Federal Deposit Insurance Corp., doubt that the Federal Reserve will be able to engineer a “soft landing,” while the CEO of FedEx, in the wake of that company’s sharply reduced earnings forecast, declares a worldwide recession imminent.  The dollar index hitting a multi-year high against a basket of currencies supports his thesis. The Fed is still behind the curve in raising rates to dampen inflation and most likely will not stop until there is significant deterioration in the labor market, heretofore the economy’s only bright spot.

Raising cash and redeploying those funds into short-term U.S. treasury securities continues to be a wise course of action. Three-month treasury bills yield almost 3.8%, and the six-month is at 3.9%. Meanwhile the ten-year note yields 3.45%, illustrating an inverted yield curve, historically a significant harbinger of a recession.  But this does not mean abandoning stocks completely.  Calling market turns is near impossible.  The chart below shows what happens over the long term if one misses that big upturn. 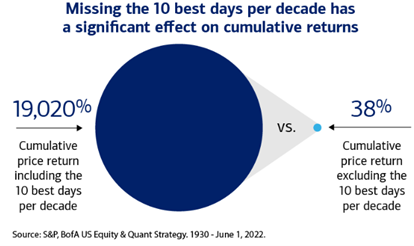 Which stocks to buy is a different question.  The table below shows Merrill Lynch’s recommended S&P 500 sector weights, and those rated “overweight” are the same sectors that we emphasized in our July 15 Weekly Market Update: 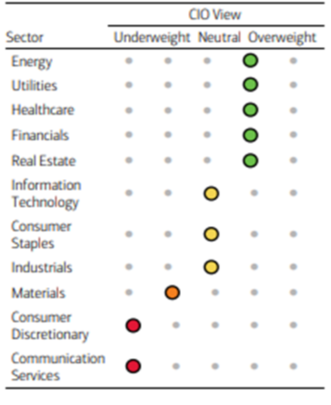 Cash flow is important, and cash flow returned to investors in the form of dividends is even more so under the current market environment.  The overweight sectors above, particularly energy, utilities, and healthcare, contain many stocks with a history of attractive and rising dividends.