So much for the rally in stocks that began in the middle of October.  The Dow Jones Industrial and Standard & Poor’s 500 were all 4 1/2% higher by month-end, while the Nasdaq had jumped over 5%. Now here we are a mere four trading days into November and half of those gains in the S&P are gone while the Nasdaq has given it all up, returning to where it was when the rally began. Only the Dow Jones has held on to most of its gain, not surprising given its components’ wide ownership and its yield of 1.9%, compared to the payouts of 1.6% and 0.9% respectively for the S&P and Nasdaq.

As we have been saying on the pages for months, as long as inflation stays elevated and the Fed reiterates its commitment to bringing down inflation to the 2% level, long-duration securities such as low-and-no yielding equities and longer-term bonds will be under selling pressure. Friday’s employment report of high wage growth and stronger than expected jobs creation indicated a still strong economy and its accompanying inflationary pressures, requiring continued Federal Reserve vigilance.

Bond yields continue to tick up, with one and two year Treasury securuities yielding over 4.7%.  Longer maturities further out on the yield curve yield less.  This is the classic inverted yield curve which historically has been a harbinger of recession.  Risk-averse inverstors continue to pile into shorter-term fixed income investments, especially US government securities, as seen below: 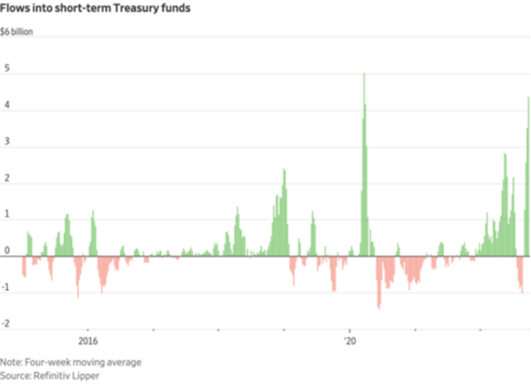 This dynamic should continue for a while. According to the CME Group (Chicago Mercantile Exchange, Chicago Board of Trade, New York Mercantile Exchange and the Commodity Exchange), futures markets are now predicting a Fed Funds rate of 5% to 5.25% by mid-2023:

Keep bond maturities within two years. In the event rates go up one can reinvest in higher yielding paper as the bonds mature. This does not mean one should eschew equities entirely.  Stay with consumer staples companies such as food, beverage, and toiletry makers and established health care companies that pay steady and growing dividends. Also maintain and increase exposure to traditional energy companies. Crude prices have climbed above $90 a barrel now, after weeks moving sideways in the mid-eighties. With Washington’s continued hostility to fossil fuels the managements of these companies have been reluctant to make the significant capital expenditures needed to increase production, and instead have been returning free cash flow to shareholders in the form of higher dividends. Large majors like Chevron, Conoco Phillips, and Exxon Mobil will receive the greater investor interest, but secondary companies like Devon Energy (DVN) and EOG resources (EOG) are more aggressively increasing their payouts to shareholders.