During the Johnson Administration in the mid-1960’s his economic advisor Arthur Okun created the “misery index,” a tool to measure how the average American might be faring under the economy. It was a simple construct, merely adding the inflation figure to the unemployment rate to produce the index. From the chart below, the index understandably reached its peaks during the Great Depression of the 1930’s, and the “Stagflation” of the late sixties through the early eighties. 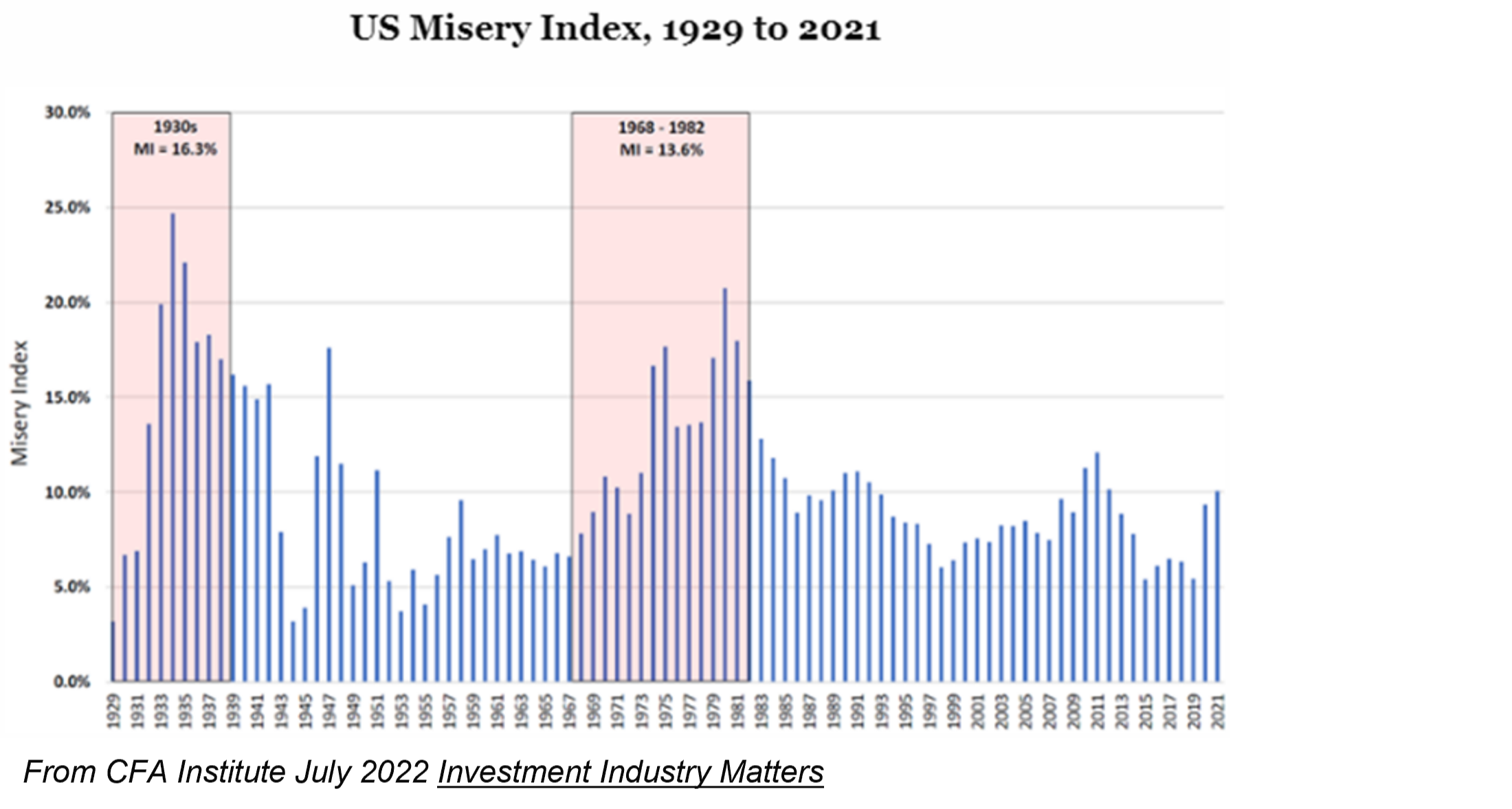 Where is the index now? It was subdued in the previous decade, with low inflation and plenty of jobs. And while there was a pandemic spike in early 2020, it was very short-lived as the economy recovered rapidly. Now it is surging. The current reading of 12.66 is up from 11.29 one year ago and 8.0 at the beginning of 2021. These reflect changes respectively of 12.12%, and a very disturbing 57.5% over the past year and a half.

Are we headed for a repeat of the 1970’s period of high inflation and unemployment? Back then the politicians refused to question their fiscal policies and instead blamed inflation on exogenous events like oil embargoes and the Vietnam War. Yet when those shocks subsided, inflation remained. Retrospective analysis revealed that these were not significant causal factors but only increased inflation on the margins. The primary cause was persistent, overly accommodative monetary policy. The same situation holds today, with government officials deflecting blame for their poor fiscal policies on the war in eastern Europe and its effects on fossil fuel supplies. Further spending indiscipline like the “slimmed down” $1.1 trillion “Build Back Better” program congress will soon pass will add more unnecessary liquidity to the markets and make the Fed’s job only more difficult.

The periodic rallies we have been seeing in stocks have all the earmarks of bear market rallies. They are based on the hope that the worst of inflation may be behind us, and the Fed will stop raising rates sooner rather than later. For a good analysis of why this is wrong, an article from the CFA Institute “The Fed Isn’t Bluffing: The Real Threat of an Upside-Down Depression” is convincing. The gist of the article is the adage “Don’t Fight the Fed” returns, but in the opposite direction. While low rates power stocks upward, higher interest rates will persist and continue to be a drag on stocks.

The view and opinions expressed in this message and any attachments are the author’s own and may not reflect the views and opinions of M&R Capital Management, Inc.