The stock market resumed its decline in the third quarter after the August summer rally petered out, with the averages receding to new lows. The Federal Reserve continues to raise interest rates in its efforts to slow inflation, with the yield on the ten-year U.S. Treasury climbing to the 4% level. As our own Paul DeSisto has pointed out, this is the highest yield for that benchmark security in fifteen years. The Fed has made clear that there will be no change of course in its policy until inflation recedes toward the 2% level. As current increases in the Consumer Price Index (CPI) remain over 8%, it is evident that the Fed has its work cut out for it.

In simple terms, the rise in interest rates increases the competition that stocks face from bonds and short-term fixed income investments. Investors received very low returns on fixed income investments in recent years, as they believed in TINA – “There is no Alternative to Stocks.” But now, low risk investments in short-term Treasuries yield over 3%, and may well reach 4-5% at the end of the current tightening cycle. While these yields historically are not out of the ordinary, they would likely be accompanied by lower stock prices.

The Fed expects there to be further “collateral damage” to both economic growth and employment, and by extension to corporate earnings, caused by its plan to bring inflation under control. It is likely that the economy’s growth will slow to a crawl or even decline in the quarters ahead, and that unemployment will rise back above the 4% level. With job openings still outstripping unemployed people, it is unlikely the Fed will moderate its current policy until the labor markets are more balanced. Lastly, it is possible that the current consensus earnings estimate for the year ahead will have to be trimmed. Analysts still expect an 8.2% earnings gain, despite slowing revenue growth and the margin pressure of higher costs for most everything.

The rapid increase in interest rates has dramatically slowed the housing market, as the cost for a thirty-year conventional fixed rate mortgage has topped 7%, versus a rate of under 3% for such a loan this time last year. That combined with a 36% increase in the median price of a US home in the past two years has lowered affordability to levels last seen in 2006, according to Yardeni Research. We would expect the housing component of price inflation (including rental prices with a lag) to recede in the not-too-distant future. As the Adam Smith Institute has stated, “the cure for high price is high prices.”

While most of the financial news is not a cause for optimism, we feel constrained to point out that stock prices are well on their way to “normal” levels of valuation after years of ebullient excess. At the beginning of the current year, the S&P 500 index traded at a rich 23 times trailing earnings. Based on today’s price level, that ratio has fallen to 16.2 times, close to the average of 15.35 times since 1929. From Yardeni Research: 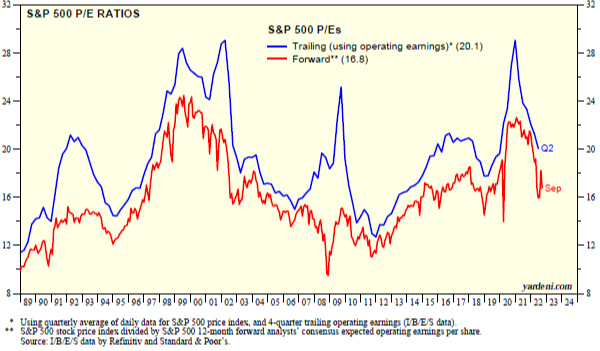 While the trailing P/E ratio going back over thirty years has been lower (for example, under 13 times in the year 2011 at the end of the financial crisis) it has not stayed there for long, as both earnings and prices do recover with the economy.